According to Survey on How Menstrual Problems Affect Work and Life of 1,956 Working Women in their 20s-40s (Part 2)
By Mizuho Yonekawa, Medical＆Healthcare Institute, Nikkei BP Intelligence Group

As part of its Comfortable Period Project (or Seiri Kaiteki Project), Nikkei BP Intelligence Group conducted the Survey on How Menstrual Problems Affect Work and Life of 1,956 Working Women. According to this study, less than 10% of women take menstrual leave, and more than 50% feel that there is a "lack of understanding of menstruation in the workplace." The survey also found that many female employees demand "support for medical care costs" as well as training to improve understanding of the issue. Here is the second part of our report on the results of the survey.

The survey asked 1,956 working women aged 18 to 49 about the support programs available at their workplaces for female employees suffering from menstrual discomfort. The results showed that 63.2% of the respondents are able to take menstrual leave as part of their wellbeing program, while other replies demonstrated that some women have options such as work-from-home and flextime arrangements during their periods.

Overall, only a small number of respondents replied that their companies provided support for gynecological treatments or prescriptions. According to the survey, in many workplaces, the only support measure available for female employees during their periods remains menstrual leave. Clearly, there is still a long way to go in terms of providing financial assistance to alleviate menstrual discomfort. 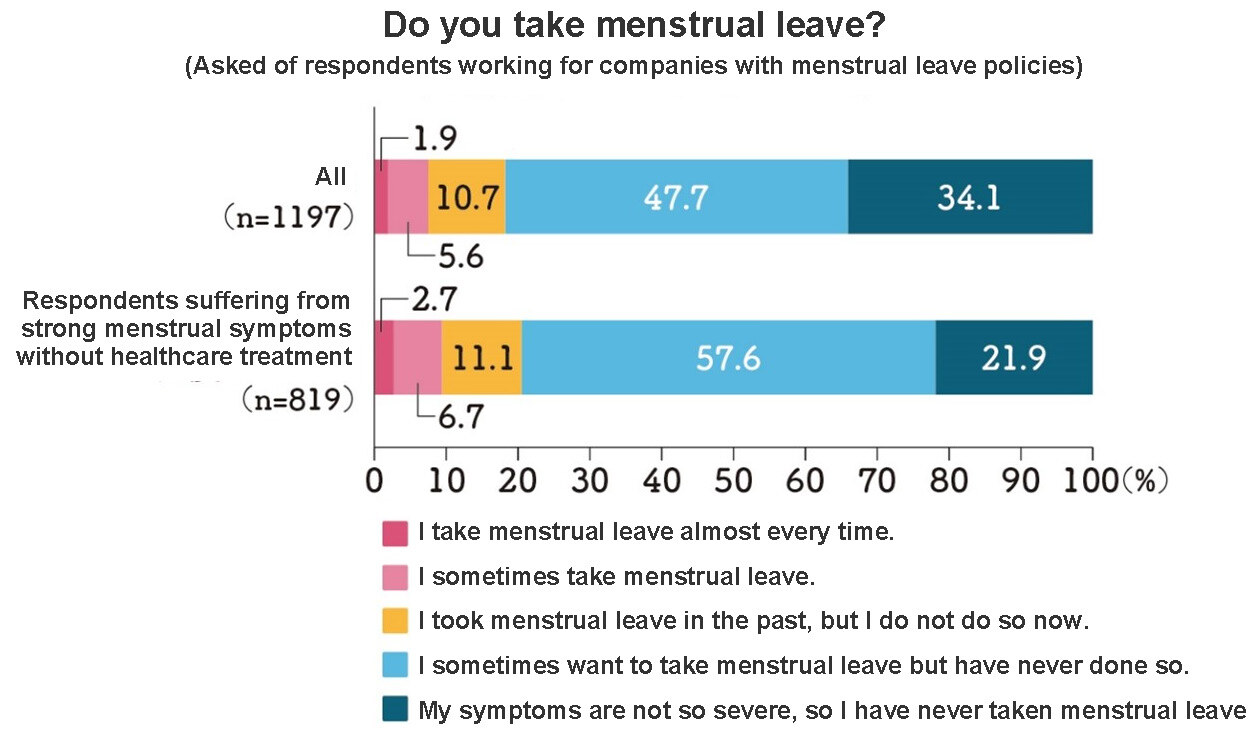 Instead of taking menstrual leave, which is a difficult choice for working women, 20% of the respondents took paid leaves for their periods. However, more than 30% of those "suffering from strong menstrual symptoms without healthcare treatment" answered that they had "never taken leave from work because of menstrual symptoms."
Asked why they did not take menstrual leave, the most common reply was "I feel reluctant to apply for menstrual leave to a male boss" cited by 61.8%, followed by "I feel reluctant to apply for menstrual leave because not many people do so" at 50.5% and "I don't want to take a leave of absence and cause trouble to my colleagues" at 36.2% (Figure 2). 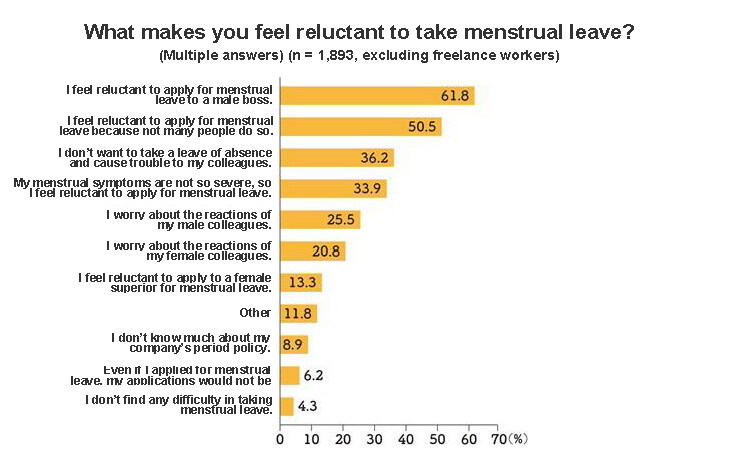 The most requested period policy among working women was "support for gynecological consultation fees" (33.4%), followed by "support for low-dose pill prescriptions" (30.4%). This was followed by "training for all employees, regardless of gender, to deepen their understanding of menstruation" (29.6%) and "training for managers" (29.2%). The results revealed hope among female employees that their companies will provide support for menstruation-related medical care costs, as well as implement company-wide training programs to deepen understanding of female health.

More than half of the women answered that their workplaces were "not supportive for employees suffering from menstrual discomfort." The companies of those who replied that their places of business were "supportive" implemented measures such as "flexible work arrangements" and "access to medical services" at higher rates. Moreover, many of those in the latter group felt that they received consideration and help from their bosses and female colleagues. The percentages of those who answered, "I like my current workplace" and "I want to continue working for my company" were also higher for such persons than they were for those working at less supportive companies.

When a company introduces an appropriate period policy, it may lead to higher evaluation among female employees, as they often feel that their workplaces are "supportive for menstrual discomfort." Such companies also generate improved human resource retention rates.

As suggested by the voices of those answering, "I don't want to take a leave from work and cause trouble to my colleagues," many female employees believe that it would be difficult to take menstrual leave every month. Such sentiments could be related to feelings about living in an era in which both males and females are expected to work equally and participate actively in the workplace. If companies are looking to implement truly meaningful wellbeing management, one possibility might be to consider providing alternative measures so that female employees "don't need to take menstrual leave" while also supporting access to medical consultation and treatment to alleviate the menstrual discomfort of more female employees.

Nikkei Intelligence Group conducted an online questionnaire survey on working women including readers and users of Nikkei xwoman and other Nikkei Group media. The survey targeted women who were experiencing a menstrual cycle, including those who were pregnant or who had given birth recently. The survey received valid responses from 1,956 women aged 18 to 49 (with 204 in their 20s or younger, 738 in their 30s and 1,014 in their 40s). The respondents either had "the symptom of discomfort" before or during menstrual periods or were "undergoing medical treatment and did not suffer so much from menstrual discomfort." The survey was conducted from August 2 to 20, 2021.