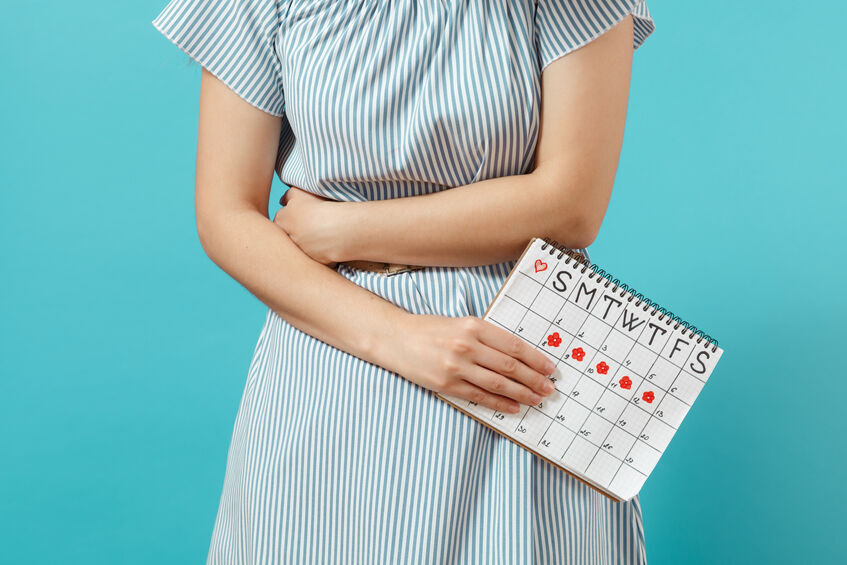 In the survey results, among the respondents having "the symptom of discomfort" before or during their menstrual periods, 66.4% replied that they suffered from "heavy symptoms." Moreover, 31.6% of them had "heavy symptoms both before and during menstrual periods" and 5.1% were "undergoing medical treatment to relieve symptoms." Since a majority of respondents did not receive any such treatments, the survey revealed that many women were continuing to work in uncomfortable conditions during their periods.

For 75% of Women, Work Efficiency Decreases Due to Menstruation

Asked about how the symptoms of menstrual discomfort affected their work, "My work/study efficiency declines" was the most common reply (at 75%), followed by "I make more mistakes" (27.8%) and "I take leave from work or school due to pain" (24.2%) (Figure 1). 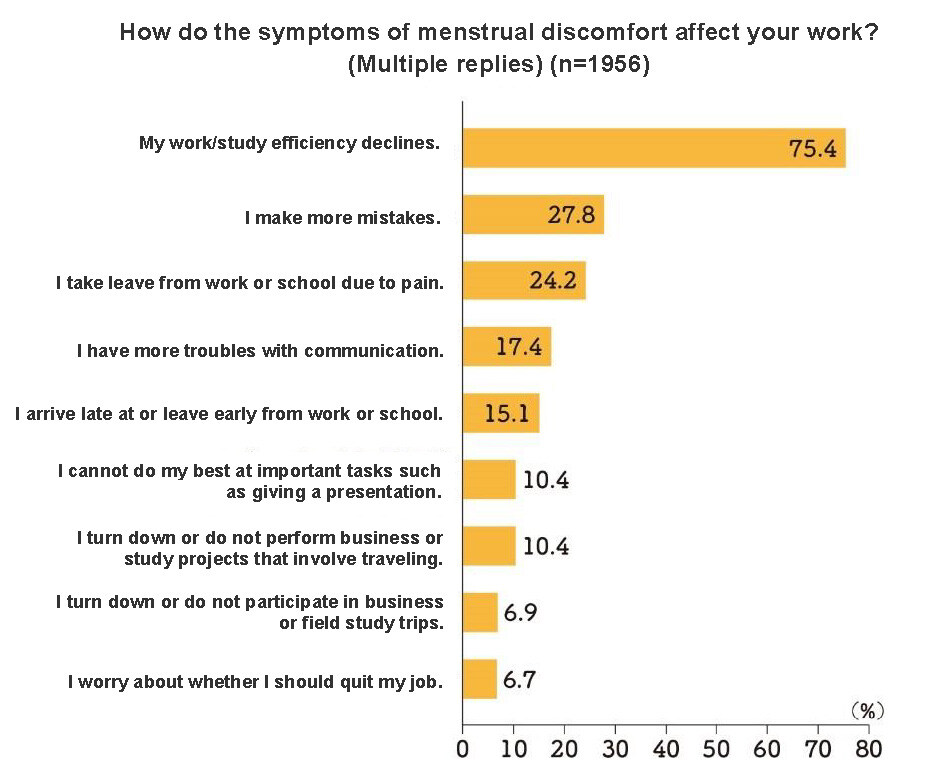 Specifically, on a scale of 0 to 10 (with 10 being the most optimal score), if their work performance (i.e., productivity) without menstrual symptoms was 10 points, productivity when they suffer from such symptoms decreased to 6.35 points, or 64% of optimal performance, the survey found. Moreover, their satisfaction and sense of security (i.e., motivation) regarding work also declined to some 60% (6.16 points). The results showed that productivity and satisfaction of women in the workplace both decline during menstruation.

When symptoms before and during menstruation were combined, the subjects were found to be affected by menstrual symptoms for an average of 4.85 days per cycle. In a calculation assuming that each woman has a typical once-per-month menstrual cycle (i.e., 12 times a year), the total number of such days will be approximately 60 per year. More than 20% also replied that they were affected by symptoms of discomfort for seven days or more during each menstrual cycle.

[Reference] Assuming that a company has 100 female employees (in their 40s or younger):
Among 100 female employees, 62.3%* replied that they "experienced female health-related problems in workplace," preformed with less productivity 4.85 days per month with a 36.5% decline in productivity and earned a daily salary of JPY20,000. An examination of these figures shows that the company will lose some 2.2 million yen per month and some 26.46 million yen per year due to labor loss.

*Source: 62.3% have female-related health problems according to the 2017 Survey on Health Promotion of Working Women by the Ministry of Economy, Trade and Industry

Nikkei Intelligence Group conducted an online questionnaire survey on working women including readers and users of Nikkei xwoman and other Nikkei Group media. The survey targeted women who were experiencing a menstrual cycle, including those who are pregnant or who have given birth recently. The survey received valid responses from 1,956 women aged 18 to 49 (with 204 in their 20s or younger, 738 in their 30s and 1,014 in their 40s). The respondents either had "the symptom of discomfort" before or during menstrual periods or were "undergoing medical treatment and did not suffer so much from menstrual discomfort." The survey was conducted from August 2 to 20, 2021.