My Resume: Episodes from the early days of famous figures 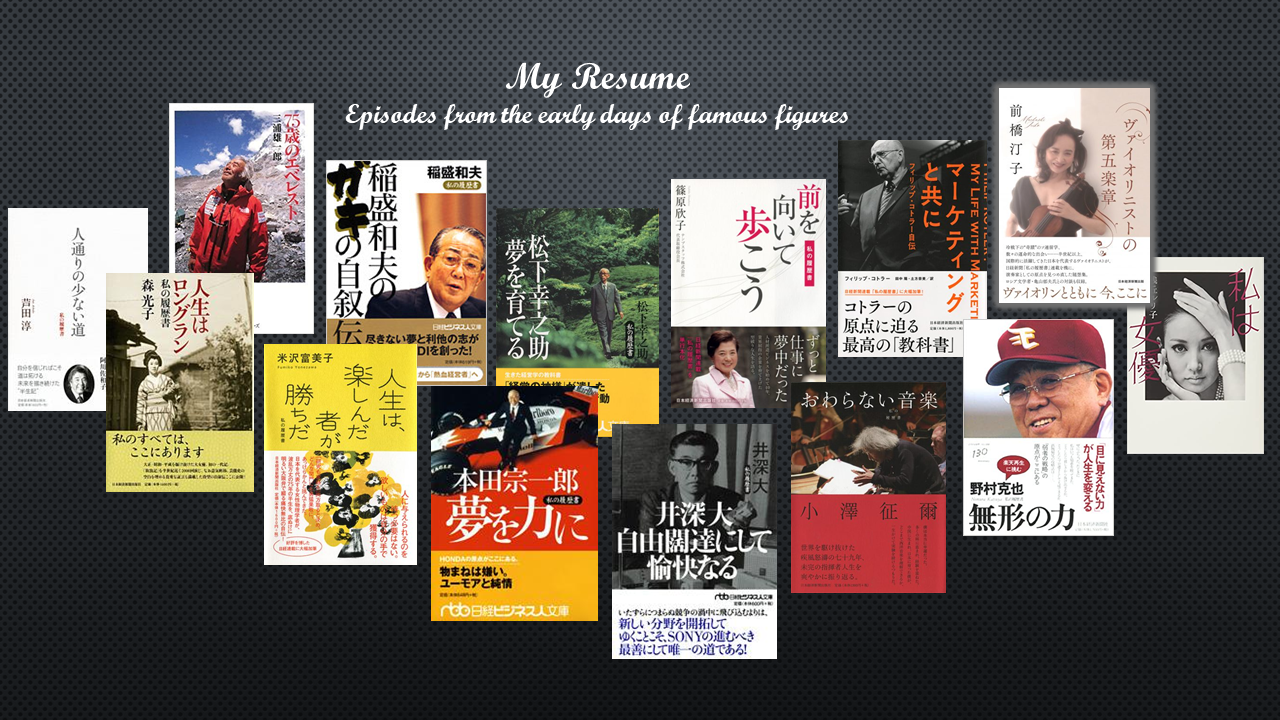 My Resume is a long-running column in The Nikkei newspaper, started in 1956 and still continuing. The series has been popular for a long time, giving famous individuals a chance to write about their early lives in their own words. Contributors have included politicians, business managers, athletes and artists who have achieved great things in a wide range of fields.

Currently, the column features a single person in each one-month series of episodes. The series that receive particularly positive responses from readers are made into books by Nikkei BP. Many such books have been longstanding sellers for years, and they are mostly released first as hardcovers and then as paperbacks. The number of books in the series has by now reached nearly 150 volumes.

We can learn a great deal from these authors' sincere attitudes toward their commitments and beliefs. The series has attracted people of all ages and genders with its depictions of how notable figures were brought up and made mistakes in their youthful days, putting a humorous touch on the background of the times. Many readers are looking forward to new releases in this book series, which is revised with new additions to the original column versions. Moreover, the passion and views on work woven through books enlighten readers with inspiring suggestions and convey the great personalities of the authors straightforwardly.

Many of the books published in this series have been translated into other languages around the world: specifically, Soichiro Honda: The Power of Dreams (Yumeo Chikarani) penned by the famous founder of Honda Motor has been released not only in China, South Korea, Taiwan, Thailand and Vietnam where Nikkei BP has published many of its translated books, but also in languages such as English, Turkish, Burmese, Khmer and Lao. Through the inspiring life of legendary industrialist Soichiro Honda, who started as an apprentice mechanic at an automobile repair factory and continued to pursue unique and innovative technologies that led him to found the globally known motor giant, the book invites readers to examine his passionate thoughts, and the latter section comes with quotes by Soichiro Honda.

The My Resume series can be said to be a magnificent collection of non-fiction documentaries starring successful figures from various fields and featuring scenes of Japan and the world in the modern era. it is strongly recommended that everyone across the globe read this unique book series, which provides the opportunity to touch the lives of great names.

The books noted here are just a few examples of the unique, high-quality publications offered by Nikkei BP. We cover a wide range of fields, from business skills useful for career opportunities and professional fields of technology to lifestyle categories such as health and culture. We are keen to see our books published in other languages and welcome requests from publishers, agents and companies interested in translation licensing.

Please contact us for more information on the foreign rights to our uniquely positioned and unmissable books.