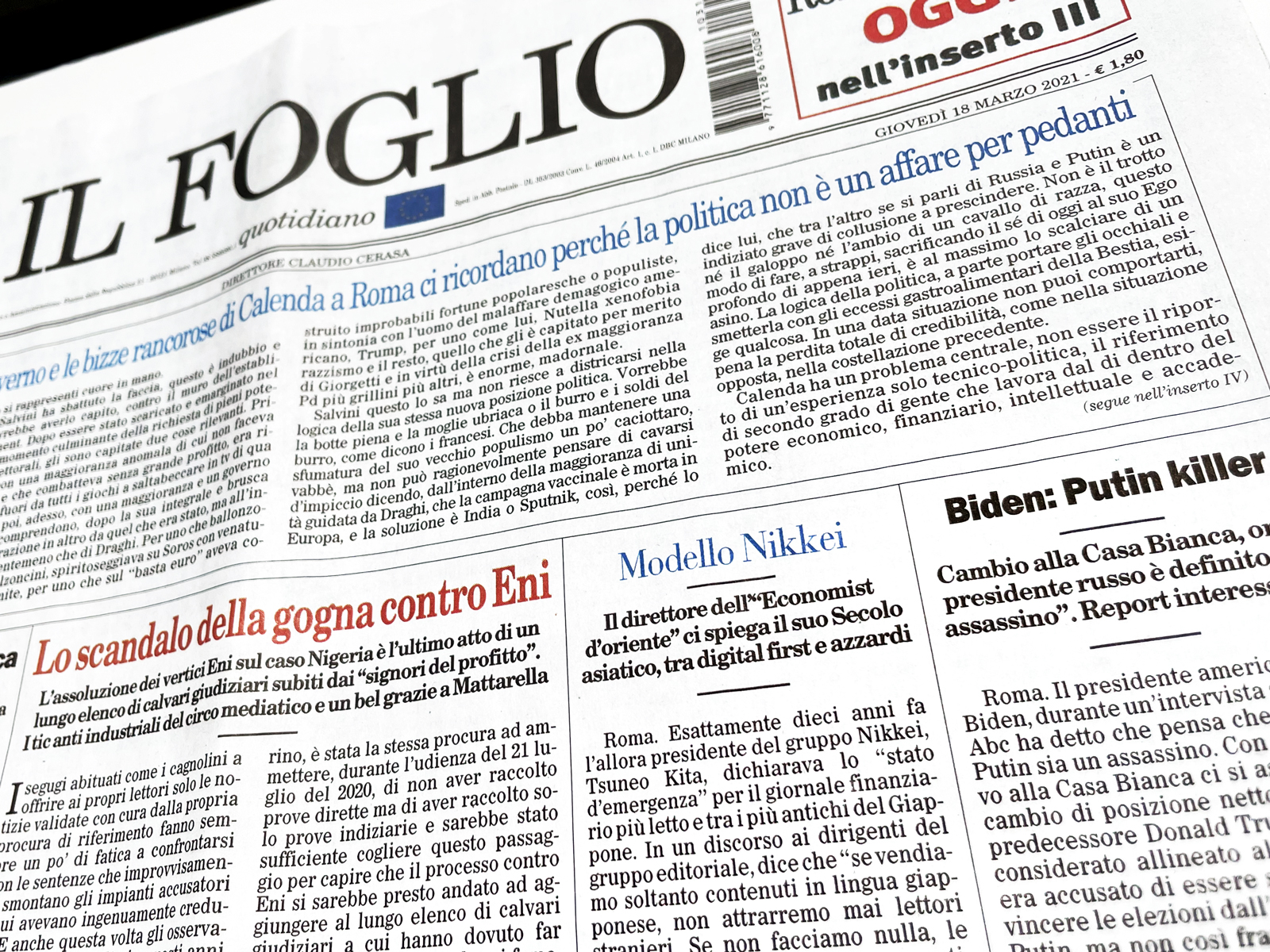 On March 18, the Italian daily newspaper Il Foglio published a front-page story introducing its readers to "the Nikkei Asia model." In an online interview that preceded the article, Nikkei Asia Editor-in-Chief, Shigesaburo Okumura, reflected on several topics--the trajectory of the Nikkei Asia since its launch in 2011, its digital-first growth, and the future of news reporting in Asia that Nikkei Asia aims to achieve.

Il Foglio, "Modello Nikkei Asia: The director of the 'Economist of the East' explains his Asian Century, between digital first and risks"

The Nikkei Asia was launched exactly 10 years ago as "the Nikkei Asian Review" by Tsuneo Kita, then president of the Nikkei Group. The publication had the ambitious goal of "providing content in English to increase the number of overseas readers." At the time, the U.S. administration led by Barack Obama had just launched its "Asian Pivot" policy, and it was a very special moment when East Asia was becoming an increasingly important region for business, politics, and global interests. The magazine was printed in the traditional format and size, resembling the Economist. Soon thereafter, however, the Nikkei Group acquired the Financial Times, a leading symbol of the financial world, and with the editorial cooperation of the FT, the Nikkei Asia has grown to become a leading digital media publication in Asia.

The journalist who wrote the article, Giulia Pompili of Il Foglio, has been with the paper for more than 10 years and is a renowned reporter with particular expertise in diplomatic issues involving the Asia-Pacific region. Pompili is fluent in Japanese, and she won the Italy-Japan Business Group Journalism Award in 2012. She has followed a variety of topics related to Japan, including the recovery from the Tohoku disaster, the Shinzo Abe administration, and demographic issues, and she has been working on a weekly newsletter focused on East Asia since 2017.

In her article, Pompili pointed out that "the story of Nikkei Asia is highly symbolic, because it demonstrates the extent to which international interest has shifted towards the East - or what we used to call "the East," from a Eurocentric perspective. The terminology then changed to "East Asia," followed by "the Indo-Pacific," an expression introduced more recently to highlight the inclusion of India. All of this is a fundamental part of the globalization process. But above all, with China increasingly assertive in its propaganda and influence on the media, a small publishing product that began as an experiment, but with the backing of a Japanese publishing giant, has ended up being the reference point for those in Asia who do business, conduct politics and make decisions. "

Il Foglio was founded in 1996 by Giuliano Ferrara, a popular Italian journalist and political commentator and has a circulation of about 25,000, with a digital edition that has 4,000 unique visitors per day. "I am very happy that this article has been of interest to our Italian readers," said Pompili, adding that she will continue to watch the growth of Nikkei Asia with keen interest.