Thinking about the Future of Workplaces: Discussing the disadvantages of digitalization and the creation of offices open to local communities 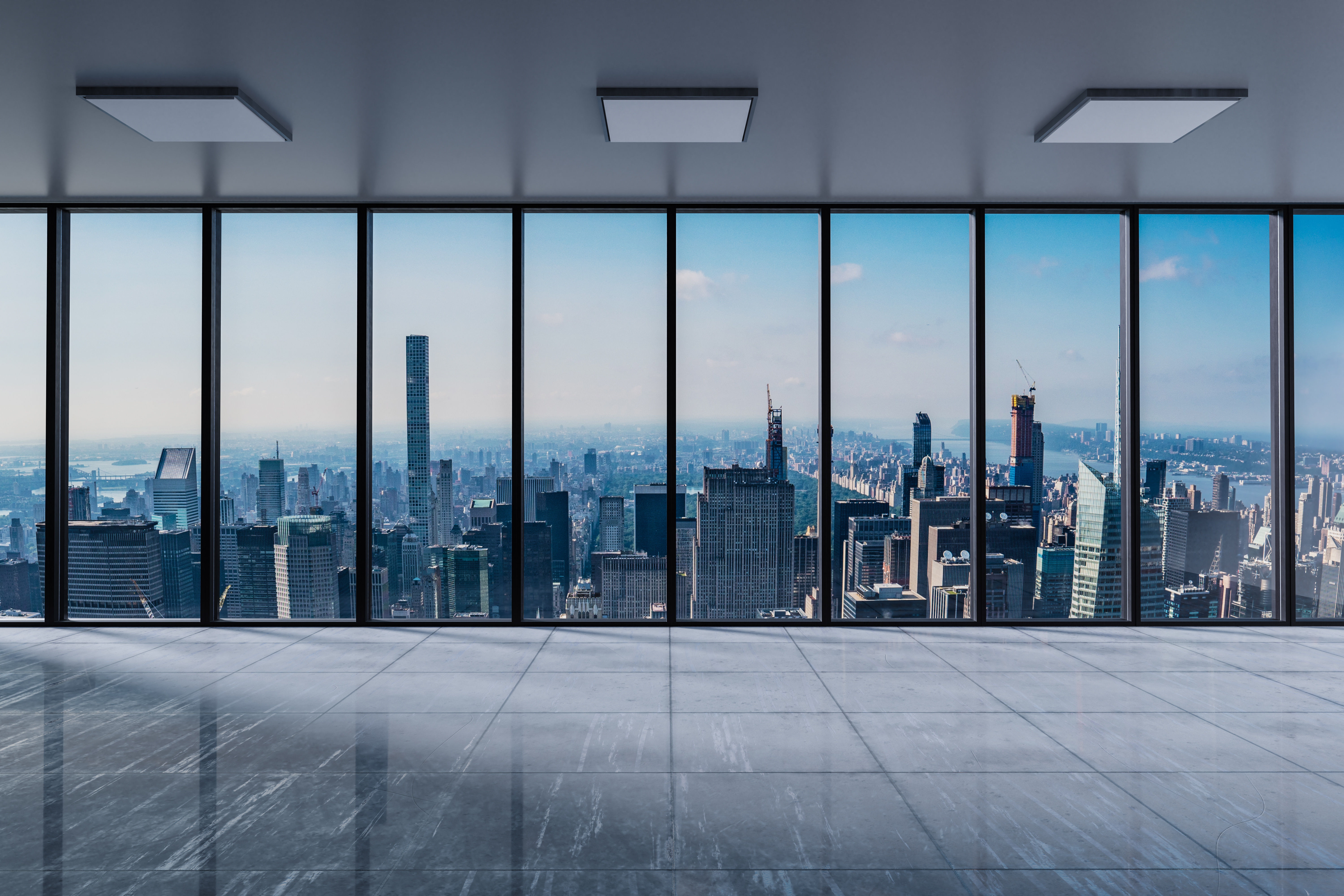 Nikkei BP Intelligence Group is proposing the "Space × Healthcare 2030" initiative, which is rooted in the vision of creating a society in which people can lead healthy and fulfilling lives in the era of the 100-year life expectancy. We are preparing illustrations of various living and working spaces that are desirable to achieve by 2030. They incorporate both tangible and intangible characteristics that can make for healthier lifestyles. Introducing them using the expression "Visionary Flag," we hope to stimulate discussions on how living and working spaces should be designed for the future.

This project has been titled the "Visionary Flag Project" (or "VFP"), and thus far it has suggested images for the future of housing, offices, and pharmacies, respectively, under three "flags": "Beyond Home (future housing)," "Beyond Workplace (future workplace)" and "Beyond Pharmacy (future pharmacy)." Among them, "Beyond Workplace" suggests the functions of an office in 2030, as depicted in the illustration below.

Based on this image, we will promote further discussions with companies and experts to flesh out the ideal "future workplace" for 2030, which can give rise to new innovations and solutions for social issues.

As the first step, Nikkei BP Intelligence Group hosted a discussion event on the "future workplace" in 2020, together with NEC Networks & System Integration Corporation (NESIC). NESIC is a systems integrator of the NEC Group currently working to establish a "next-generation workstyle vision." On the day of the event, Professor Minoru Noda of Meiji University Graduate School joined the discussion remotely to exchange views. Topics under consideration included issues related to contemporary office environments and how they should be designed for the future. During the discussion, participants shared their insights on the following issues that became apparent when considering the ideal workplace for the future. 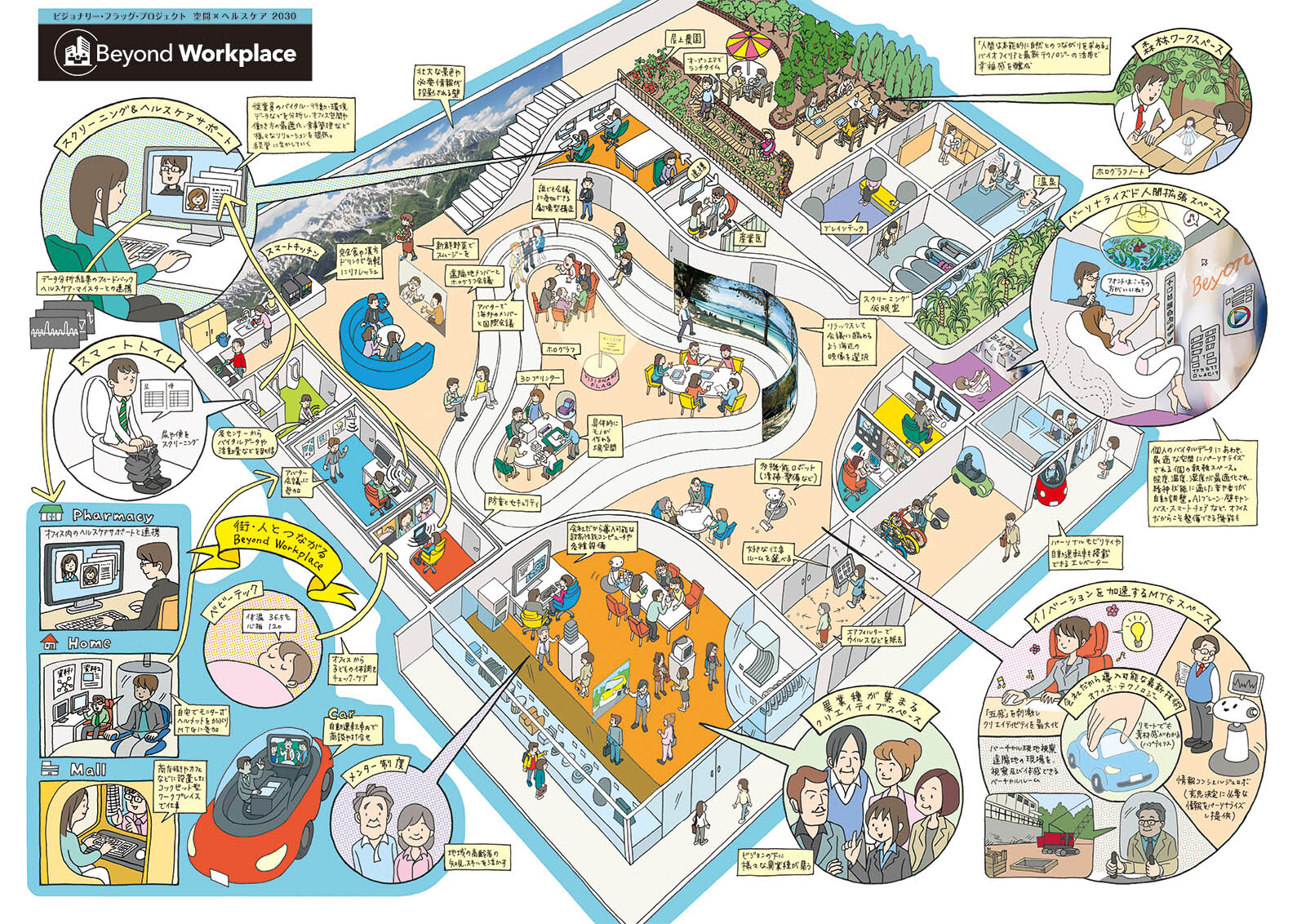 Disadvantages of office digitalization:
Reevaluating the importance of in-person communication

Given continued uncertainties about when the COVID-19 pandemic will end, companies are promoting office digitalization at a rapid pace. At the same time, certain disadvantages of the digital workplace have become apparent. During the discussion, participants first exchanged their opinions on such disadvantages, and several cases were reported in which workers had become confused due to the use of one-way communication depending solely on digital tools.

"Workers receive numerous messages sent in a one-sided manner by e-mail, Teams, Slack, and other digital tools. Moreover, such messages are not sorted by importance, and it is impossible for a single person to check them all. In some cases, "workers need to ask their subordinates to check emails," and online meetings are also causing disadvantages in terms of communication among workers. At physical meetings, participants can conduct small talk about the agenda after the meeting, which can lead to better mutual understanding and new ideas. At online meetings, however, participants leave the virtual meeting room as soon as the event is finished, and they have no opportunities for further communication."

Other inconvenient aspects of digital workplace that were cited include: "Everything is done online, even consultations on minor issues" and "I used to walk around my floor and I could ask many people for advice, which helped me boil down my ideas. I cannot do that anymore at the digital workplace."

When we have face-to-face conversations, we can judge the importance of a topic based on the attitude and tone of voice of the other person. We can also exchange views in real-time. However, e-mail communication is one-sided, and it is difficult to distinguish delicate nuances and to determine the importance of messages. Kazutomo Yoshida, NESIC's marketing executive, said, "I think we need to review one-sided digital communication at the workplace and reconsider the importance of in-person communication." Tomio Kikyobara, Executive Fellow of the Nikkei BP Intelligence Group, also noted, "In the future, office communication will be based on digital connections, and the real world will somehow become included in the connected world. In the future, meeting someone in person may be regarded as a precious experience."

The results of the "Survey on new workstyles" conducted by the ICT Innovation Research Institute of Nikkei BP Intelligence Group were also revealed at the event. The survey asked respondents to point out the what made them feel inconvenient or uneasy when they were working from home. The most-cited answer was the "[feeling of] obstacles in communication with colleagues." Moreover, the number of respondents who selected this answer seemed to be increasing over time, since the government's declaration of the state of emergency. 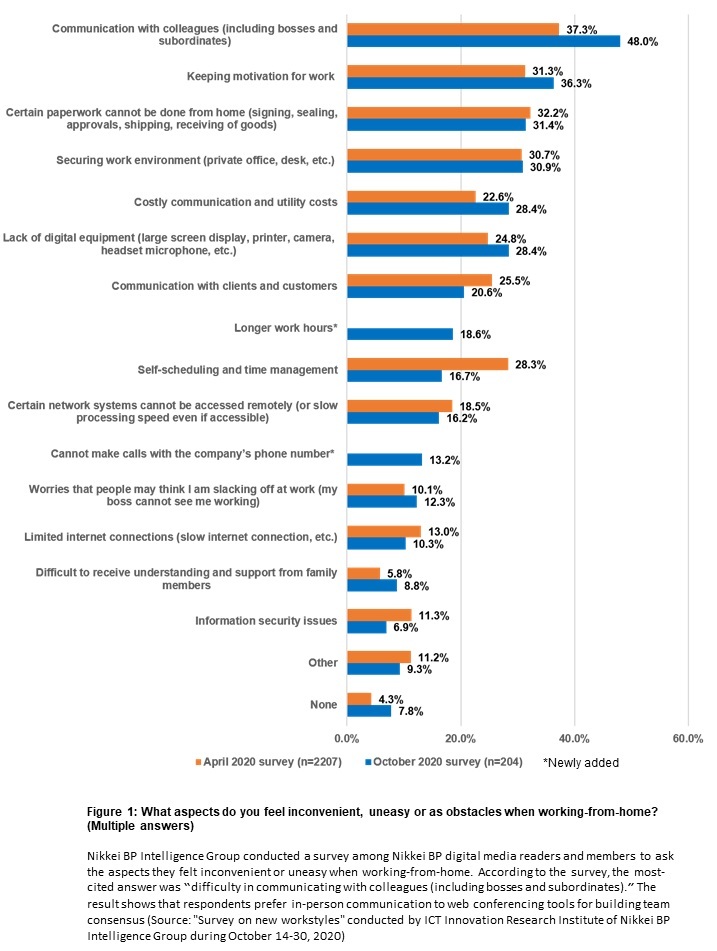 Issues surrounding communication with colleagues also affect the organizational strength of the company. For example, it is said that all members need to share the information on "who has what kinds of knowledge and skills" within the company to make a strong organization. This type of information sharing has been made possible mainly through in-person communication, but how should we complement it amid the progress of workplace digitalization?

Regarding this matter, Professor Noda of Meiji University Graduate School is paying attention to "digital identification" as a new tool for building trust. "In the conventional system of society, we have learned to place our trust in a business partner by actually meeting and exchanging business cards. In place of such items, electronic business cards and digital identification may be used more widely as alternative ways to build trust. If we can store the achievements of projects with which we were involved in the past and other business history automatically as ID data, such data may help to supplement business communication."

Hiroki Takahashi, Manager of Nikkei BP Intelligence Group's Strategy Planning Department, also said, "We need a system that allows you to easily search for the name, work experience, specialty fields, and other information regarding your business partner when you look up his or her ID on your computer. This system would allow us to learn about the strangers who are sitting next to us in free-address work environments, and we can communicate with each other more easily. We will also need to use and implement the system together with the company's personnel evaluation system."

The idea of "visualizing" different values of employees within an organization was also suggested by participants. "People who place more importance on social contribution than on money will not be motivated to work more simply by higher overtime pay. Visualizing the different values of employees will help to create a better working environment," said Takahiro Kikuchi, Senior Fellow of Nikkei BP Intelligence Group. In fact, Attuned, a startup founded by a U.S. psychologist, provides communication assistance tools that help visualize employees' values and ways of thinking and about work.

Participants also discussed how the physical office environment should be designed for the future. If work from home and office decentralization progress further, the roles that headquarters (i.e., central offices) are required to play may also change. NESIC imagines that the ideal central office of the future should be "a place that allows you to meet reliable colleagues and partners" and "an open environment where employees and third parties, including other companies, customers and members of local communities, can nurture casual, borderless business relationships with each other."

Next, NESIC raised a question in the middle phase of the discussion. If an office is opened to the outside world, who belongs to the office? In response, Kikuchi from Nikkei BP Intelligence Group discussed the roles of open laboratories set up within the office spaces of many companies. "Many large companies set up open labs as co-creation spaces to attract people from outside their companies. This allows companies to recruit the talent that they need (but cannot find within their organizations) from external sources," said Kikuchi. According to him, an open lab is used as a platform to provide third parties with business opportunities while still giving priority to the growth of company.

Looking at the issue from a different angle, Professor Noda likened an office to a city and said that the German marktplatz could be a clue for thinking about the future of central offices. A marktplatz is a market square in the city. According to Professor Noda, it is a place in which various people come together, since it is filled with stalls and is adjacent to public facilities such as city halls, schools and churches. "You can get a great deal of information here and meet new people. It is also a cultural and values-related center. I think the central office of the future will need to have such functions," said Professor Noda.

It was suggested that the central office could serve not only as an information source for business opportunities, but also as a platform for exchanging views on various values, cultural matters, and technologies. It could promote learning experiences that would help people to grow personally while and creating opportunities to meet others.

Due to the COVID-19 pandemic, we see an increasing number of cases in which companies set up satellite offices in rural areas or relocate their headquarters to such places. Regarding this issue, participants discussed the relationship between local communities and companies.

Taro Tokunaga, Manager of the Infrastructure Institute of Nikkei BP Intelligence Group, introduced the smart city project that is ongoing in Aizuwakamatsu as an example case. Accenture and other companies are spearheading the office relocation project underway in this smart city, working together with local universities to conduct an experimental demonstration of how social issues of local communities can be resolved. One survey suggests that more than 500 local governments in Japan are "implementing" or "examining the implementation of" smart city projects (Nikkei Glocal No. 389; Special Feature: "Smart City Projects in Full Swing," June 1, 2020). Many initiatives are aimed at resolving issues faced by local communities by smartification. "Solutions for local communities and those that generate corporate profits have things in common. With the progress of office decentralization, we may see more opportunities for innovation through working together with local communities in different regions," said Tokunaga.

Takahashi of Nikkei BP Intelligence Group introduced the case of Kamiyama in Tokushima Prefecture. In this small town, which features a rich natural environment and has a population of some 5,000 people, IT ventures and startups have arrived in succession and set up satellite offices. Eventually, the project led to the building of a school, and an education business was started there. This is an example of how a company's expansion to a rural area can lead to a revitalization of the host town. "When residents, local governments and private companies come together and work toward a single goal, their abilities are unified and many things become possible," said Takahashi. The discussion, which lasted for about four hours, focused on other topics surrounding office environments in the era of the "new normal." Based on the outcomes of this discussion, NESIC developed the idea of drawing up a "next-generation vision for workstyle" within itself. Meanwhile, Nikkei BP Intelligence Group will continue to organize discussions with a wide range of companies, aiming to complete the "Beyond Workplace" vision. This should serve as a "visionary flag" for future office environments. (Text written by Atsushi Sakai)